Seed Terminator produced its first unit in 2016 and has since refined the product every season.

Attached to the back of a harvester, 253 800 kg units are now in service in Australia and 23 in Europe and North America.

Kangaroo Island inventor and farmer Dr Nick Berry, who won InDaily’s 40 Under 40 Awards this month, founded the company with his uncle Mark Ashenden in 2016.

Ashenden said some of its subcontractors were forced to shut down for periods during the coronavirus pandemic last year while others remained open as essential services, causing an inconsistency in the assembly process which ultimately caused production to stagnate.

He said the ability to assemble and distribute his own units from the Lonsdale facility alone over the past few months has streamlined production and would allow up to 200 Seed Terminator units to be produced this year.

“It’s an investment for us to own shares here, but it’s all under one roof and we have a key,” said co-founder and executive director Ashenden.

The Seed Terminator uses a multi-stage hammer mill to pulverize the weed seeds, spreading sawdust-like debris behind the cutting head.

Tests carried out by the Weed Research Group at the University of Adelaide showed 96-100% destruction of ryegrass seeds using the machine.

It can be installed on new and used John Deere, CASE IH, Massey Ferguson, Claas and New Holland Class harvesters and sells for around $ 100,000. 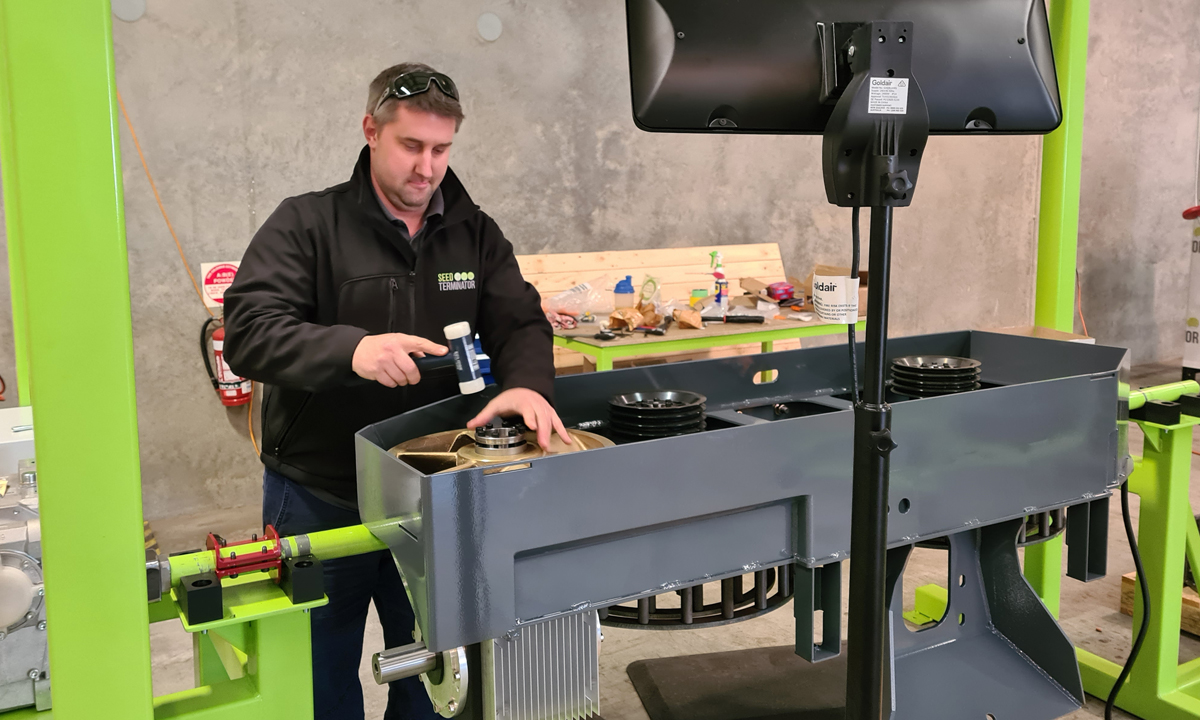 Chris Batty of Seed Terminator is working on a new unit at the new Lonsdale assembly plant.

Ashenden said supply issues during the coronavirus pandemic forced him to plan his supply chain and source more Australian-made parts.

“We ended up taking a hit because a lot of the items we have to order have delivery times that have dropped to three to seven months,” he said.

“Belts and gearboxes are really all that comes from overseas now.

“The steel we source from domestically and it’s made into basic components off-site in South Africa and we assemble it here.”

Seed Terminator produced its first unit in Lonsdale in April and has increased its workforce from 16 to 34 in the past 12 months.

This figure is dominated by R&D engineers and assembly and warehousing staff, but the company is also expanding its sales force to ensure it is not held back by border restrictions.

Late last year, he established a model to put at least one Seed Terminator employee in WA, NSW and Victoria to ensure the company had someone on the ground at all times, even when interstate borders were closed.

About 20 percent of sales are equipped with new harvesters, with the remainder being adapted to existing harvesters at farm machinery dealers in Australia with a delay of around two months between order taking and delivery.

Ashenden said having a field sales force in major grain-producing states has given farmers and dealers greater confidence.

He said 20 units had already been shipped to Western Australia from the first orders ahead of this season’s harvest, which begins in October, and that orders from other states were also increasing towards another record year.

“In the first three months of this year, we’ve done half the number we did last year,” Ashenden said.

“Now, sales are starting to kick in for quicker delivery when the preparers already have their machines.

“WA is the biggest market and it also has the greatest potential for the product, but NSW, Victoria and South Australia are all quite similar in terms of market size, so for us to be centrally located. Adelaide is perfect for all of these markets and we have no problem shipping east or west.

Media diversity is under threat in Australia – nowhere more so than in South Australia. The state needs more than one voice to guide it, and you can help with a donation of any size to InDaily. Your contribution goes directly to helping our journalists find out the facts. Please click below to help InDaily continue to get the facts.